Alternative answers are always possible, as is the possibility of a definitive answer remaining elusive. I presently lack an actual conclusion as the data gathering process is clearly not over. There are still multiple dangling loose ends and unanswered questions that could potentially produce a different path of thought – depending on what was learned if and when more information ever comes to the surface. The trails to follow have often proven to be quite old and cold.

1) If the plant in what used to be Eltzner’ garden turned out to have collection data rather than being of horticultural origin it might shed some light. That seems too much to hope for even if he was still alive to ask.

2) If the white wooly fruited plant in Oz (NSW) ever has some collection data or the name of its collector unearthed it might suggest an area in Ecuador to search for the pachanot.

This plant does not appear to be an identical match with the pachanot but it DOES show an interestingly white wool covered fruit on a line its owner believed was collected in Ecuador. 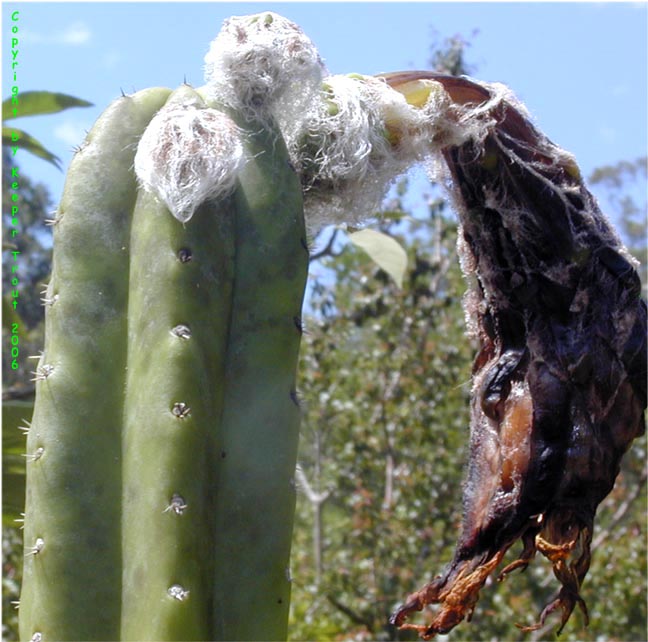 3) I still have not determined if what is at UC labelled huanucoensis really grew from Harry Johnson’s seed or if it is simply a mislabeled pachanot. I would like to suspect the latter.

(This is in reference to the version in the front parts of the garden not those located farther back which were mentioned elsewhere here.)

Assuming that this can be shown to be synonymous with the pachanot, as some commercial growers believe this is simply a pachanot that was mislabeled, probably in the early 1960s, this specimen would be the oldest living representative I have thusfar encountered.
I have yet to see this one after it was out under more favorable conditions so still have questions. 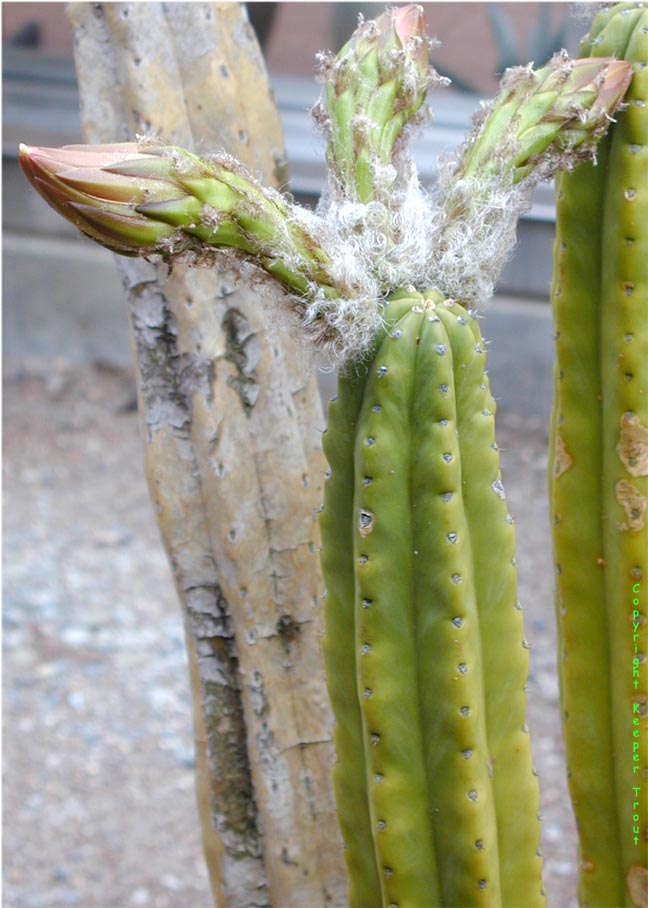 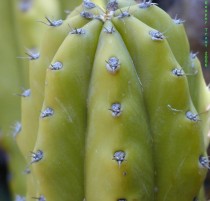 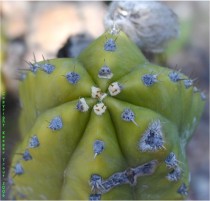 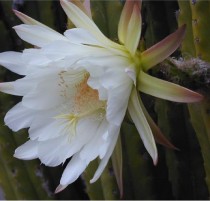 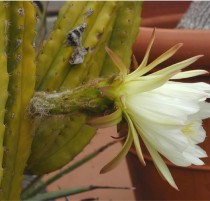 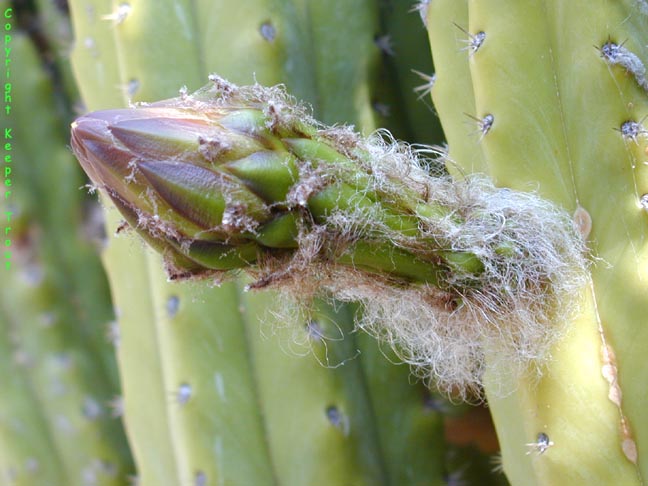 4) There are also questions involving the riomizquensis sold by Horst Kunzler and the population it was derived from since almost every plant that NMCR sold was grown from seed he had planted or was harvested from a mother plant that he had grown from seed.

Nigel Taylor has referred to it as Echinopsis pachanoi subsp. riomizquiensis.
Friends visiting Bolivia have not yet been able to track it down. 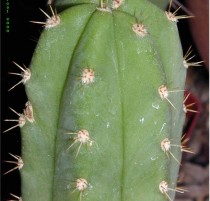 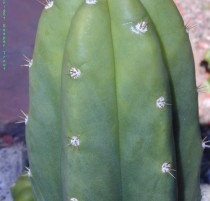 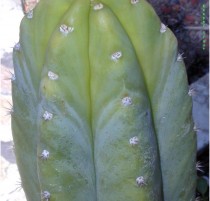 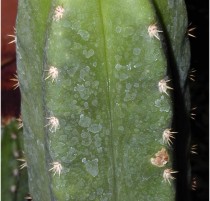 6) wrt items 5 & 6, there is some interesting material in Bolivia suggesting the suggestion of need for further local exploration; as this blow-up from one of Dani’s photos illustrates..

7) If the claims of this originating through Oz from an early Ritter field expedition (via Field’s hands) can really be substantiated. 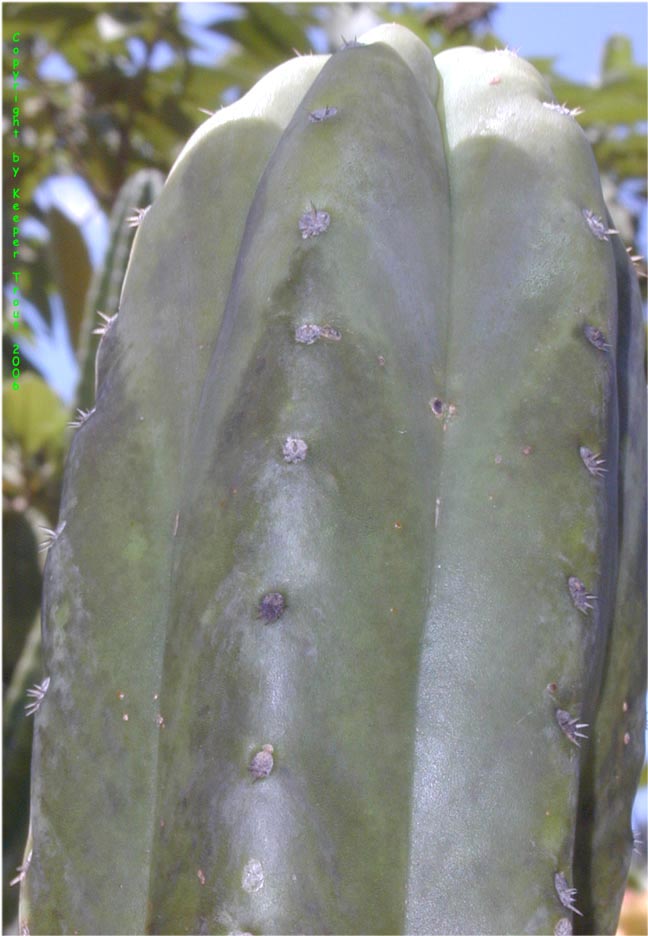 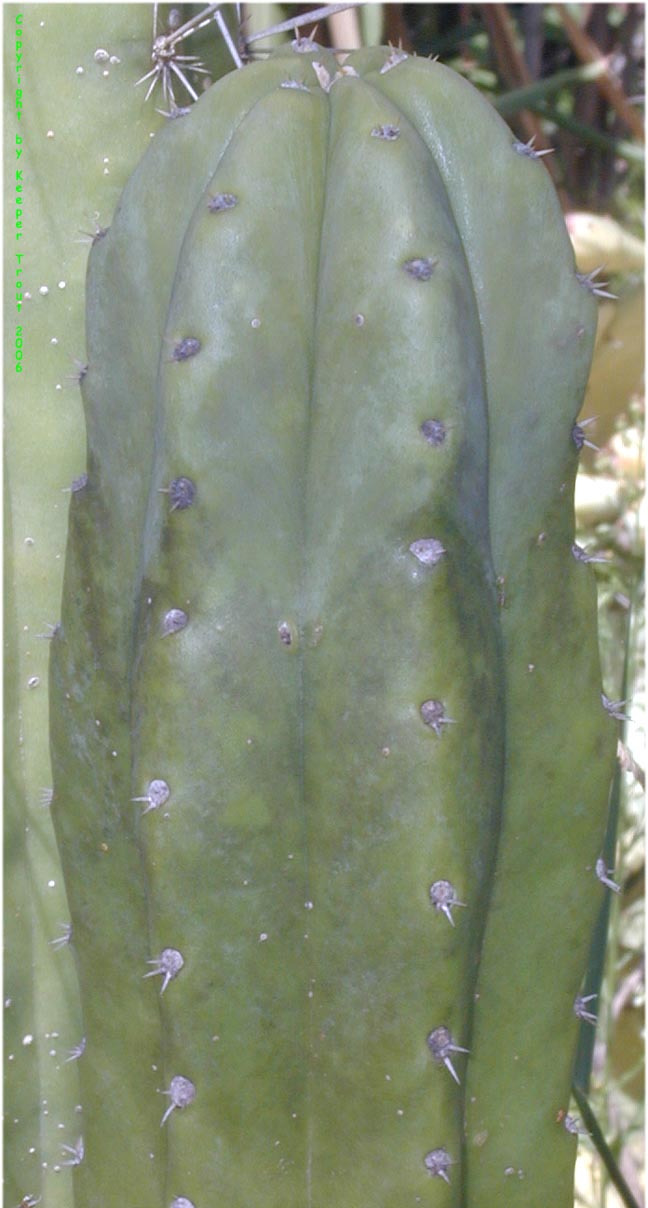 8) If the material his father received from Harry Blossfeld in 1935, something that is actually in Field’s collection, turns out to be synonymous with the pachanot. If that could be established, it would go far to explain why it appears to be present in the USA, Europe AND Oz as, according to Robert Field, Blossfeld sold a total of 12 shares in order to finance his expedition costs. See a more detailed discussion in the forthcoming 2015 edition of the San Pedro book. 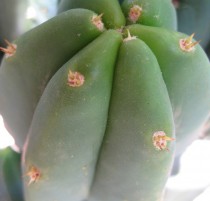 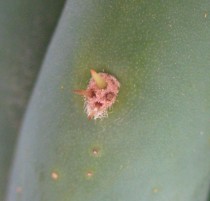 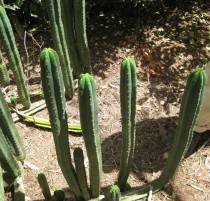 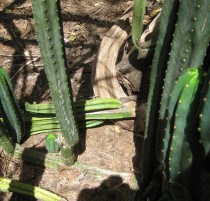 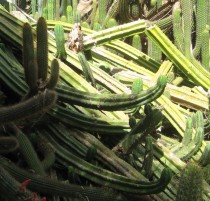 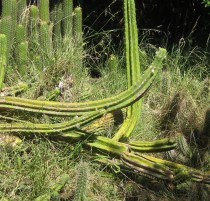 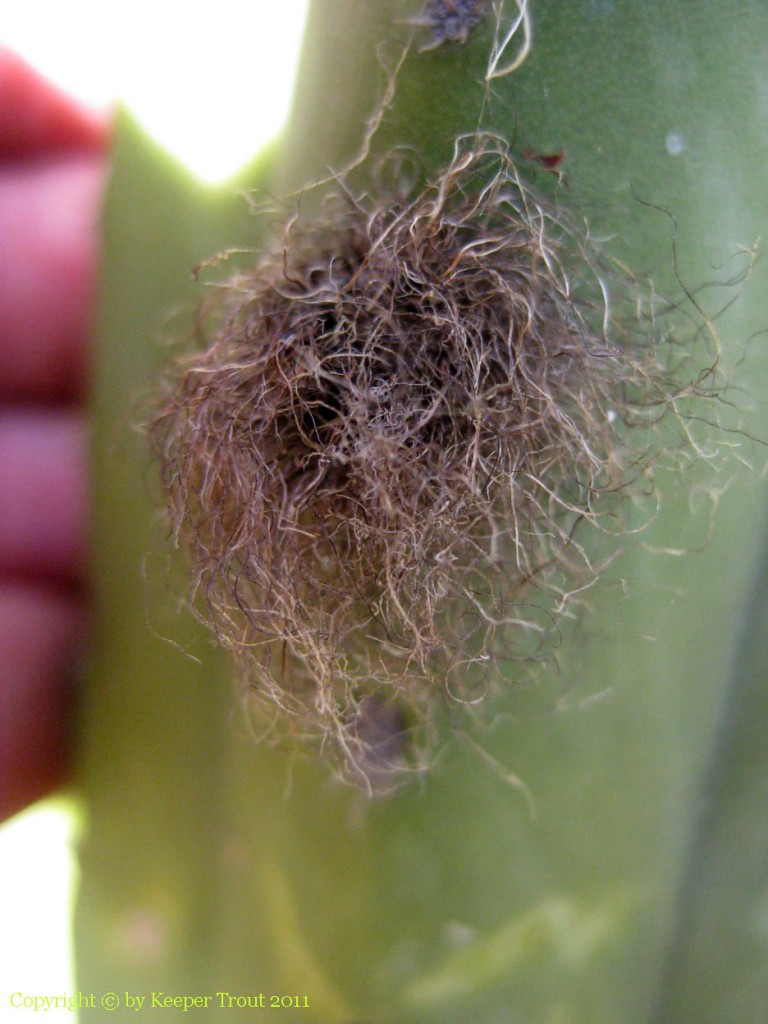 There is also a very similar plant at Field’s, from the same source, that produces more blackish hairs. Field believed this to be a trivial difference. Compare for yourself in the following image that shows them both together.

Many things are possible of course as not all of the facts are in yet. It is certainly possible that the pachanot is simply a naturally occurring form of Trichocereus pachanoi with a hair color variation despite the *seemingly* lack of anyone’s ability to locate it in the wild (and the various other differences that we’ve mentioned). Just because something occurs in a given location does not guarantee it a place in the earth or continued existance if someone disagrees. Many entire populations of many different cactus species have disappeared and will no doubt continue to do so.

This first image has both that and what may be the pachanot growing together. The rest of the following are just the darker haired one. There also appears to be at least two additional pachanoi forms at Field’s so it is not clear if all of these came from Blossfeld. 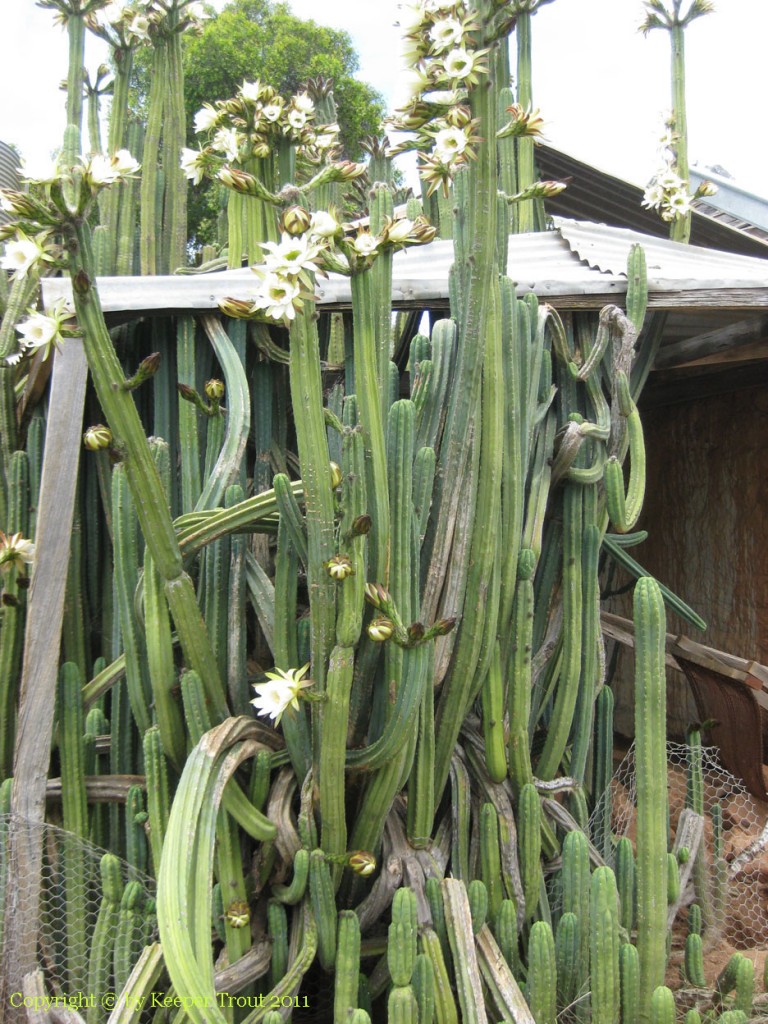 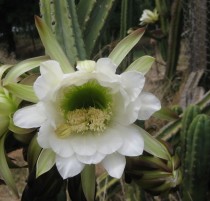 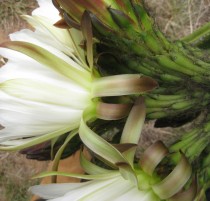 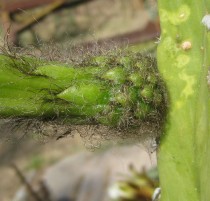 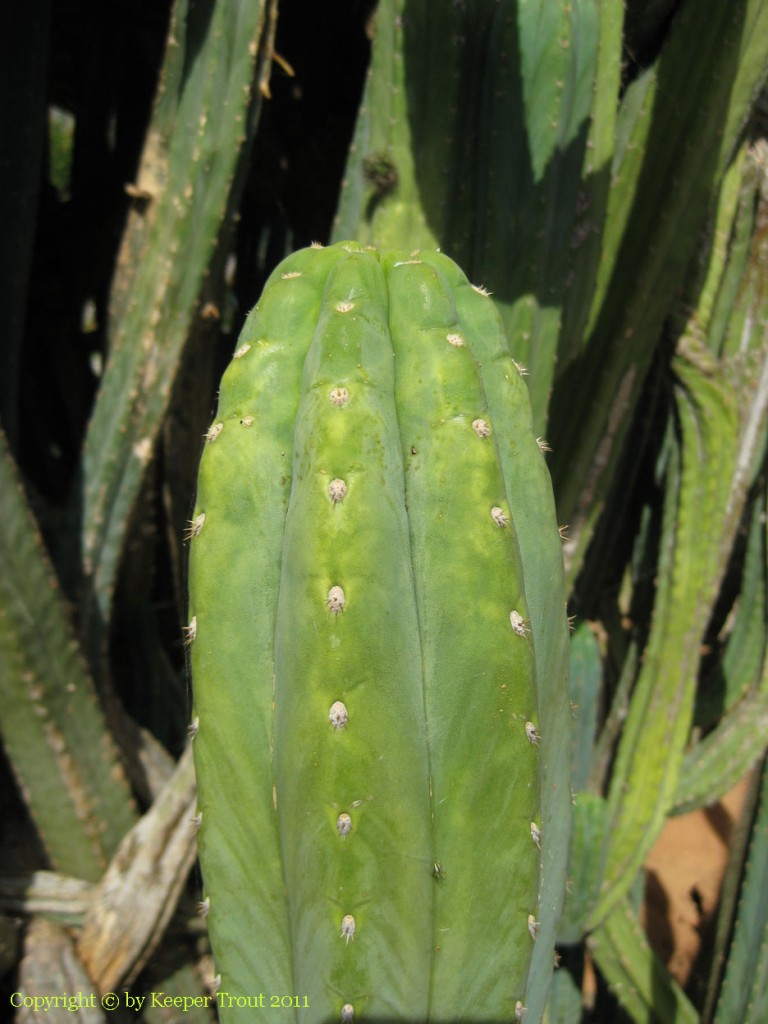 8) No doubt there are many additional alternate answers I do not yet know about or have not thought of.

Let me know what YOU can think of!

Copyright © by Keeper Trout where applicable;