The new home for this page (with more images) is now at: http://sacredcacti.com/wp/blog/lophophora-williamsii/

Peyote has experienced many names in its history but the important older ones to be familiar with are Echinocactus williamsii, its confused moonlight appearance as the brief-lived Anhalonium lewinii and as Anhalonium williamsii (outside of a brief period of problems produced among some ethnobotanists, chemists and pharmaceutists by the appearance of A. lewinii.)
More details are in the Anhalonium lewinii commentary.

A peyote “tuft” in Presidio County

Lophophora is known to mean “I bear crests” (in reference to the hairy tufts) [from the Greek; lophos: “crest” and phoreo: “I carry”. Pizzetti 1985].

A peyote bearing its “crests’ in Jim Hogg County

The name williamsii was said by Rümpler (in Förster 1885) to be in honor of C.H. Williams, who was said to have traveled in Bahia, Brazil.
According to David Hunt (2006), C.H. Williams was a former British ambassador to Bahia.
dict.leo.org disputes the certainty of this, offering instead Theodor Williams, a Vicar of Hendon with a large garden in Middlesex that was noted for its many cactus specimens.
dict.leo.org also noted that another claim exists asserting it was named for botanist J.W. Williams; the Williams they refer to appears to have been a botanist in the USA with an interest in forensic science so it makes no sense as a choice of whoever assigned the name.

A reader also brought to our attention a comment by Cels et al. 1841–1842 (p. 354) in which this species was noted as having been dedicated by Lemaire to a “Mr. Williams”, an avid amateur collector near Lourdes, France (“[…] zele amateur des environs de Loudres“). The connection of Williams to this plant was not included.

Any rationale underlying the specific name choice for any of those proposed names is unclear to this author. Cels seems to offer the most logical choice so it is puzzling that Rümpler, Hunt, Anderson and others would either miss or ignore his words.

Rümpler 1888 mentioned that its country of origin was still unknown  at that time but Cels 1841–1842 had clearly indicated it as being from Mexico.

Salm-Dyck, Coulter & Schumann
They all look so serious.

The person who actually selected the name is also not clear. I would assume from the description and from the note by Cels that it was  Charles Lemaire but there seems to be some question raised about that.

Among the many names worn by the peyote plant, one is particularly convoluted. It was for a time commonly known as Anhalonium lewinii due to a strange twist of fate caused by a drug company, a handful of botanists, a couple of pharmaceutical chemists and a following of unquestioning ethnobotanists. See a detailed discussion and references herein under Lophophora diffusa and, more pointedly, under Lophophora lewinii.

Common names used for or names applied to peyote

Archaic peyote, some beans and a rock 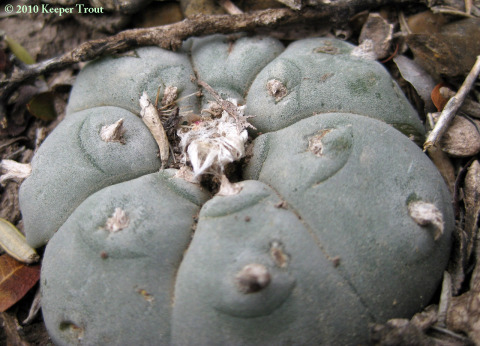