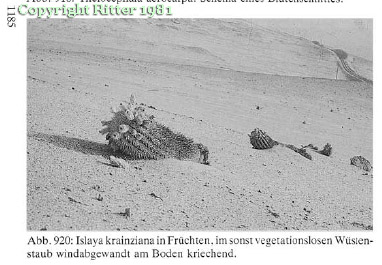 Image above is from Ritter. I have not been able to locate who owns Ritter’s copyrights so have not obtained permission for the use of this image. If someone can give me more information on how to organize formal permission it is most welcomed or if the presence is objectionable it will be removed promptly.

According to Anderson 2001, all of the former genus Islaya has been merged as a highly variable Eriosyce islayensis (C.F. Förster) Katterman.

Origin: Found in southern Peru (above Mollendo, dept. of Arequipa). [Named for the town of Islaya.]

Ribs are 6 mm in height and number around 17. The areoles initially bear whitish-grey felt.
Spines are rigid black, later becoming grey.
There are 20 to 24 six mm long thin radial spines and 4 cruciform (usually) centrals which are stouter, thickened below and up to 18 mm [20 mm] long.
3/4 inch [2-2.2 cm.] flowers arise from the felted area and vary from golden to light greenish-yellow.
Hairy, carmine fruit starts globular and ripens elongated. Perianth and a few bristles persist on the top of the fruit.
Backeberg 1977 page 217.
and Pizzetti 1985 Entry #137. (Pizzetti has a color picture with fruit.)

These are represented in collections as beautiful but small and slow growing specimens.

Backeberg notes that wild collected plants of Islaya are sometimes difficult to grow.